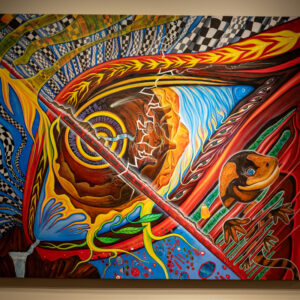 Part of the Regenaissance art show currently on display at the Quigley Art Gallery.

Blue, twisting train tracks spread like octopus arms from Amanda Sage’s painting “Medicine Train.” It’s the central piece in the show hanging in Western Colorado University’s Quigley Gallery now through October. The tracks extend across the wall, past painted figures with light streaming from their foreheads, near architectural drawings and toward the title of the show, “Regenaissance,” written on the wall in Sage’s distinctive calligraphy.

The train is one of many motifs in this symbol-heavy show. There are birds springing like spirits from hands, roots spreading outwards from eggs and forests creeping into ruined cities. But while the themes aim for the universal, the background of “Medicine Train” — Tenderfoot Mountain complete with the “W” on its slope — is a reminder that this is a thoroughly local show.

Indeed, “Regenaissance: Remembering the Future of the Gunnison Valley” is an essential experience for anyone wanting a deeper understanding of Gunnison’s art scene, and it’s a fitting conclusion to a three-part exhibition of Gunnison Valley art history that has been a multi-year effort for Western Colorado University faculty, students and valley artists. The show connects the artistic powerhouse of Joe Bob Merritt’s South Main artist residency program with Western Colorado University’s art department. The result is forward progress for both.

At the show’s opening Sept. 3, Merrit said the exhibition was a “flowering that is a result of over 50 years of intention making,” tracing the origins of South Main back to a dream in 1972.

Jeff Taylor, head of Western’s Masters in Gallery and Museum Management, admitted that the melding of South Main with the graduate program could have happened sooner.

“It’s one of those peculiar disconnects that happen in our valley,” Taylor said.

That’s not to say the programs are strangers to each other. When Taylor landed at Western five years ago, art history professor Heather Orr told him right off that he needed to meet Merritt and Sage and to engage with South Main. Taylor has done that with his masters program by taking his students to South Main during their practicum, a week of hands-on learning for first-year students.

Western art professor Jeff Erwin hatched the idea of making South Main artists the subject of this year’s practicum show. The students stepped up to the challenge, Taylor said.

“They felt an enormous responsibility to really do this correct to this place,” he said.

Rachael Stubbs was one of the masters students who curated the show. Because she lives in the Gunnison Valley, she had an outsized role. Most of her peers in the program live elsewhere and departed when the practicum ended. Stubbs found time between her studies and her full-time job at the Crested Butte Center for the Arts to complete the punch list for the show’s opening.

“We put in blood, sweat and tears,” Stubbs said of her student cohort. “We spent countless nights in here during the practicum, painting this giant mural (the train tracks) until 3 a.m., painting that wall till 12 a.m.”

“We are trying to convey the spirit of collaboration, the genre of visionary art as a whole, the hope for a better future,” Stubbs said.

According to Merritt, there are some 10,000 meaningful objects at South Main, which is a repurposed lumberyard at Main Street’s street’s dead end near the airport. The graduate students had their pick of what was on the walls in studios, in community areas and in the living quarters of artists in residence.

Remarkably, the students fit almost all of the selected pieces into the Quigley Gallery.

South Main artists have had many shows in Gunnison, including some at the Gunnison Arts Center. But Merritt said it was one of the most important shows that South Main and its artists’ group — the Blue Thunder Circle ARTifactory — have had because of the fruitful collaboration with Western.

The unifying mission of the Blue Thunder Circle is to “make things that are full of meaning,” Merritt said. 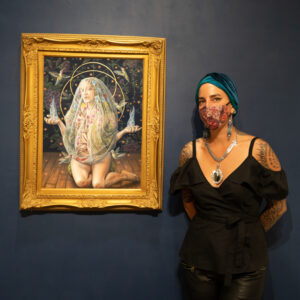 For artist Olivia Jane, who started her residency at South Main last year, this meaning-making takes place with oil paints on canvas. Her icon-like portrait of a fellow artist, “Soul Retrieval” gets its own wall in the show, the blues in the painting and the gold on the frame offset with a wall painted navy by Stubbs and her fellow students. Hummingbirds hover above the nude female figure’s upturned hands. Her face and torso are covered in a thin veil, within which plants grow.

The title and subject come from an idea that part of one’s soul exits during hardship. The veil is the separation of reality and the afterlife. The hummingbirds are a sign that Jane associates with one of her ancestors.

Taking in the show for the first time on Friday, Jane said “the bulk of this work is optimistic. It calls us back to ritual and community, and to creating a culture here in the Gunnison Valley that will endure.”

( π ) Pi is a new digital currency developed by Stanford PhDs, with over 15 million members worldwide. To claim your Pi, follow this link https://minepi.com/yildiztekin Download from your mobile phone and use username (yildiztekin) as your invitation code. Then mine from your mobile or desktop to collect Pi coin everyday.

We dont spam our loyal customers , you can unsubscribe anytime